TEI Insight:
This is It?

When we talked a month ago, there were myriad issues facing the markets that traders had to be aware of because of their potential to send the broad indices north or south in a decisive, directional fashion. This is something we’ve talked about for some time, given the coiling and stored energy that has been building into those indices.

Well, we did get such a move post-election…sorta. Both the SPX and INDU broke through significant levels and key longer-term trendline support. The INDU looked poised to trade all the way back to test its channel support level down at 12k—very significant because that channel has existed on the monthly chart dating back to the 2009 lows. The SPX was sporting the same basic profile.

Then a funny thing happened…just when it looked like the short side of the market was gonna prevail, both pulled off rather sizable intraday reversals on 11/16. Thereafter they headed back to the same perches they’ve occupied for some time now—namely 13k area for the INDU and the 1,400 level for the SPX. The net effect is they are down very moderately from their levels a month ago and the same boundaries in terms of support and resistance remain in play. 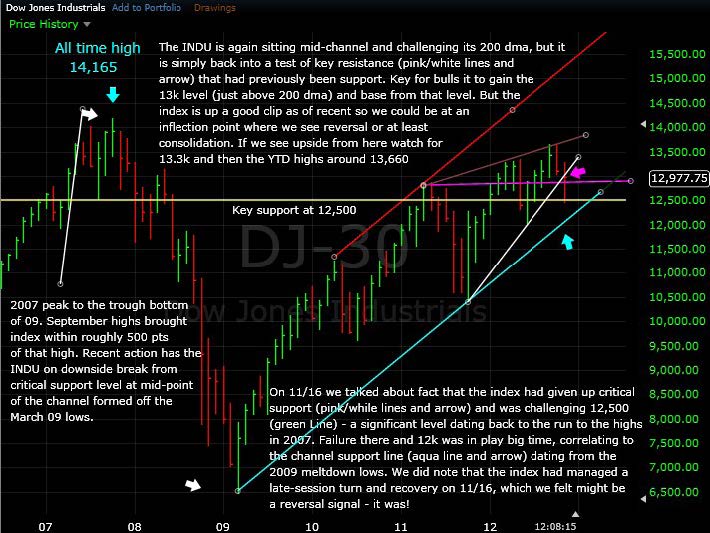 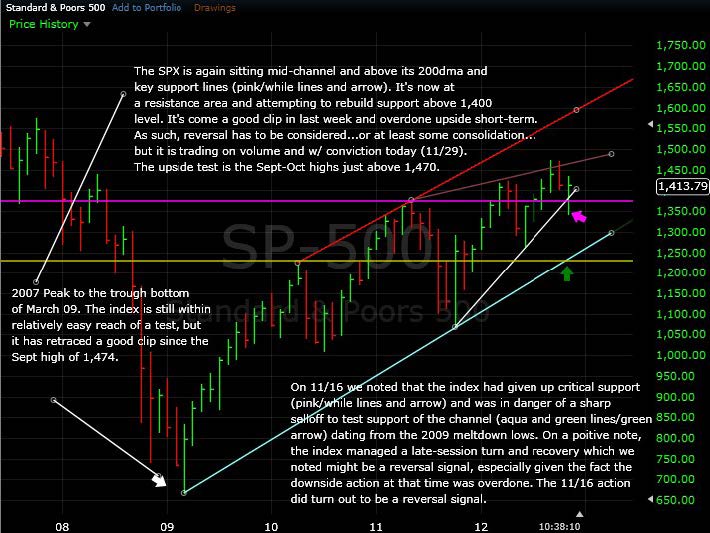 So has anything changed or are we witnessing a market that remains indecisive and content to head out of the year in side-winding fashion? Well, one thing has changed. We no longer have myriad issues in front of us to contend with. The election is done. Earnings have concluded with relatively little damage done. Iran, Israel, China and Europe all remain troubled, but things have surprisingly quieted on each front in the past days.

Which leaves us with the Fiscal Cliff… That was always going to be the issue and it is indeed so now. All eyes are on the daily developments and the pols have been dutifully spinning, which has served to whipsaw activity in both directions…and back again to the aforementioned perches.

The issue is clear enough, but clarity on the outcome is anything but. We are looking at several basic scenarios:

No doubt that sounds pretty Machiavellian—sadly it is befitting the track records of both sides of the isle in Washington.

With all that said, the clock ticks down, the pressure ratchets up and the question remains—who will prevail and will these indices finally be allowed to exert their stored energy in decisive, tradable fashion, no matter the direction?